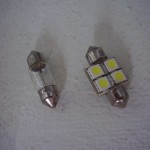 If you’ve purchased a skiff with a poling platform and an electronics package in the last decade, it probably came equipped with the Hella 2010 series anchor light attached to it. These lights seem to be the industry ‘standard’ from a plethora of manufacturers. I’ve personally seen them on everything from Mavericks to Gheenoes, and everything in between. It honestly is not a bad light, it folds and it serves its purpose as an anchor light to U.S. Coast Guard (USCG) specifications.

Though it ‘works’, the light is not without its problems. Many owners and users of the Hella 2010 series light have been ‘waterlogged’ and experienced a drained battery after prolonged use as an anchor light when night fishing. Thankfully, these are two problems with an easy DIY fix.

Approximately 2 minutes. So easy a caveman could do it.

Problem #1: Water Inside the Housing 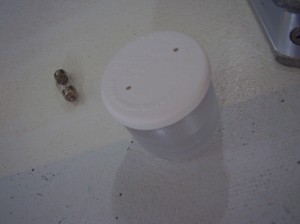 Waterlogging of the Hella unit occurs when precipitation and rain just become too much for the bulb housing to handle and water begins to build up inside of the housing. Owners can have from 1/4″ to 1″ of water built up inside of the unit which can cause a short when flipped upside down.

The fix is easy, take a small drill bit and slowly drill two holes in the ‘bottom’ of the bulb housing (when the Hella 2010 light assembly is in the ‘down’ position) like shown below. Two holes are used because air needs to be replaced while the water is draining out. If a second hole isn’t- made, the water will simply drip out really slowly. 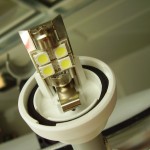 Standard incandescent bulbs can cause battery drain, similar to when you leave a car door cracked open overnight and you awake the next morning to find your battery has died. Some people have even done this in the supermarket parking lot; so it’s not uncommon to have a battery drained inside of a 6-8 hour night fishing trip. Let’s also face the fact that while standard bulbs are sufficient for the USCG 1/2 mile rating, LED bulbs can put out much more power while drawing only a fraction of the voltage from your battery.

The fix here is also extremely easy, remove the old standard bulb and replace it with your new 31mm festoon LED bulb. Ta-da!

One stipulation on the bulb choice, though. I personally used a single-sided LED bulb with LEDs on only one side of the circuit board which holds them. A much better choice would be to select a 31mm festoon LED bulb which has LEDs on both sides so that you have even light distribution. My theory was that if the bulb was bright enough, the bulb housing itself due to its opacity and texture would diffuse the light around 360 degrees. I was 95% right, as you can see below it works very well, but there is a slight spot exactly opposite of where the LEDs are pointing that is somewhat fainter than the other directions.

A 360 degree LED festoon bulb can be purchased here.

You now have a super-bright LED bulb and superior (much less) power consumption while the unit is in use.

The photos below show the LED anchor light in use (in my garage) with the lights on and in darkness: 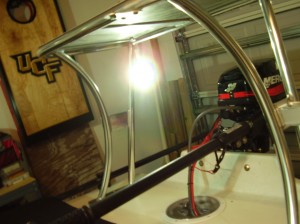 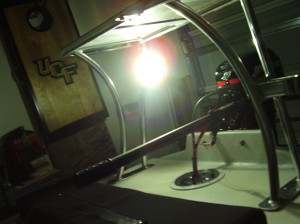