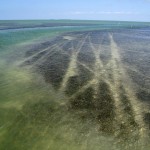 We’ve all seen it, and maybe done it before. The guy who runs too close on plane while you are poling around. The group of guys anchored up in the middle of a channel between flats. Maybe even the guy who follows you into your favorite spot. These are all examples of what not do to while flats fishing or fishing any shallow waters.

You may not only ruin someones day and make yourself look like a huge clown, but you can also destroy the environment. Shallow water estuaries are often times very delicate areas that take years to repair from boating mistakes and human intervention. There are a few ‘unspoken guidelines’ you can follow to ensure your time on the water is well spent, and that you are courteous to others. 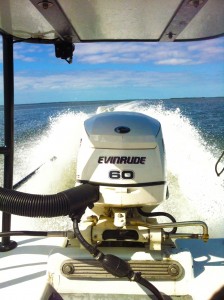 Prop scars. We’ve all seen them while flats fishing. Prop scars are caused when someone misjudges their skiff or boat’s draft level (whether by accident or intentionally) and runs over a grass flat causing a long indentation or ‘scar’ in the grass. Know your skiff’s draft level and know where you can run. There is no such thing as a ‘skiff that can run in 3″ of water’. That is a complete lie. Fine, your skiff can slide over a 3″ puddle for a few seconds, but after that your water intake needs to be back in at least 6″ of water or else your powerhead is toast.

Now let me clarify; we are talking about grass flats here. If you are a Texas, Louisiana, or Georgia/Carolina lowcountry fishermen you can most of the time get away with running over 6″ of mud or sandy bottom. We are talking about grass flats in this example, so be mindful of them. If you are running over a grass flat, dont run in anything less than 12″ of water…even then the thrust from your motor is kicking up sediment and disturbing the bottom.

Do this at home: Measure your skiff from the bottom tip of the outboard skeg to where you ‘think’ the water level sits on your hull. The number you get is your draft. Even if your stern is lifted while on plane, this will give you a good slight overestimate about where you should and shouldn’t be running.

Rarely can you get out on the water anymore and not see any other boats. In the early days of backcountry fishing you could set out and not see another skiff for days. With the amount of people fishing and the technology and range most modern skiffs have, it’s tough to find a totally secluded space (Not counting Everglades National Park…you can still get lost in there). When you see another angler poling a flat, fishing a school, or anchored up; give them some space! Too many times do people run wide open on plane right past someone who is poling, or get off from running on plane and begin poling within 100 yards of another skiff. What the hell is that? Is there really not enough space on planet Earth to fish?

As a rule of thumb in a more crowded fishery such Mosquito Lagoon, stay at least a football field away from the next skiff. Even then, that’s too close. For less crowded fisheries such as the 10,000 Islands or Everglades National Park, there is no excuse to pull up within hearing distance of someone else. If you can see the color of their boat, or what the angler’s are wearing; you’re too close! 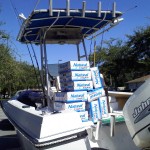 Some people like to soak bait, drink a beer, or just hang out and fish in their larger skiffs. Fine. When fishing stationary, it doesn’t give you the right to just anchor up anywhere you want and call it ‘my spot’ for the day. Be mindful of where you are and how you are anchored up. Don’t anchor up or stake out in the middle of a channel or running lane between flats. Guess what? Someone is going to come by your new ‘fishing spot’ and break some of the rules above because they have no choice. You’re in a running lane!

In order to not destroy precious sea grass on the flats around you, or run aground, the skiffs will need to run the channel. Sorry, but you can’t be mad.

Instead, try anchoring off the edge of the flat so boats can safely pass through. Or better yet, fish that drop off! You have no idea how many fish like to hang out on the edge of those flats…

When moving, boats make wakes. Even if you are poling a boat slowly, you are creating a pressure wake the fish can feel. Along with the proximity guideline above, watch your wakes when running near other anglers. The wake you create when running 50 yards away from someone can cause the school of fish they’ve been stalking to spook off. 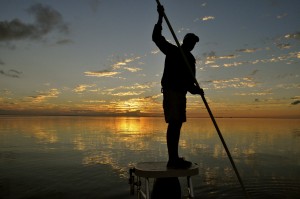 Another example: A two way running lane that is surrounded on both sides by mangroves (such as the backcountry access lane in Flamingo at Everglades National park) and is only about 25 feet wide. Don’t run wide open and cause huge wakes when you know people are also running the lane in both directions. I’ve been in a skiff before that has almost been swamped because some clown in his bay boat didn’t want to slow down to a reasonable speed. I hate that guy.

“Should I run over this shallow flat?” Probably not.

“Should I be running wide open on plane in this area?” Maybe, but probably not.

“Should I pull up right behind this guy and fish around him?” Slap yourself.

Many etiquette mistakes can be avoided by asking yourself this one simple phrase. Try it one day, and you too can be a well mannered and courteous flat’s fisherman!