I’ll start off by saying that I hope everyone had an awesome 2014 full of tight lines and bent rods. I am hoping 2015 will be a repeat and hopefully better that the past year.

As many of you are aware, the Indian River Lagoon has become locked into a downward spiral of grass loss, fish displacement, and disrespect by man. I can remember as far back to 2004 when I started to fish the Mosquito Lagoon and surrounding areas. I would wake up before anyone else in the house, get my rods ready, check knots (as I had previously rigged and rerigged the night before), make breakfast and try and attempt to wait patiently for the others to get up. The ride out seemed like an eternity. We would launch the boat before getting carried off by the mosquitoes and be on our way to the first flat of the morning. The blood colored sun would be rising over the refuge, over Playalinda beach on the eastern wall. You could hear the crash of the surf. It was a humbling feeling. I wouldn’t care if I saw or even caught fish. Being out there and experiencing nature in all it’s majesty was fine with me, and still is today. Seeing bobcats, panthers, alligators, pigs, and if you were lucky, the flag shaped tail of a redfish inviting you to make a cast.

As we got off plane and glided over the deeper edge of the flat, you could just about feel the presence of th 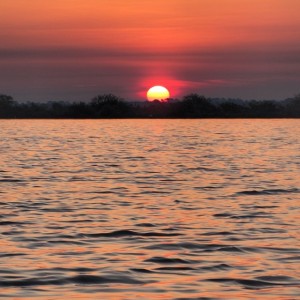 e redfish belly crawling and tailing on the flat. This was a common sight before the introduction of bay boats and other vessels powered by larger motors unable to run or float as shallow as a skiff. I would hop up aboard the casting platform while my uncle or friends would be on the watch tower carefully poling the skiff to the tails that were waiving at us on the summer mornings. I would strip out my fly line on the deck or ready a spinning rod with either a surface plug or jerk style lure. The chance would come and it was hit or miss. I learned early that it is better to always throw long than short, reeling or stripping the lure into the fish’s view. The eat: my favorite part of the process. I could lose the fish at the boat or snap off but to this day it still doesn’t matter to me. There is nothing better in my mind than a double haul, landing the fly between the fish’s eyes, and watching this creature you have just fooled with thread and chicken feathers eat a concoction that was thrown together the night before, and disrupting the tranquility of the morning environment. Glass was shattered. As the heat would increase, we would move out to a trout spot and throw corks and in pure amazement, watch baby speckled sea trout attack the lures all the way to the boat. Besides the fishing, my favorite part was stopping at the McDonald’s on the way home.

Those were the days, the days before the lagoon was exploited for the numbers of reds that it possessed. Fish are being taken out at an unprecedented rate. There are few to no tides, which allows the fish to roam freely, which also makes them harder to pinpoint.

As I mentioned before, the loss of seagrass is a major concern. The pole and troll zones surely help, but are not properly enforced. Props rip across flats such as cucumber, tiger shoals, and whale’s tail. It’s truly a disturbing sight to see. They take many years to recover and even start regenerating the grass.

With this being the first post, I don’t want to rant about all of the bad that the lagoon is experiencing. I have created a page along with the help of Captain Billy Rotne of Tail Hunter Charters of mosquito lagoon called “Mosquito Lagoon Conservation Effort” that can be found on facebook. Feel free to join and post comment and thoughts. A website will be up shortly.

In the meantime, we can all do our part in helping the health of our lagoon system. Boat smart, pole in and out of areas, respect the fish and their world. By you stepping off dry land, you enter the land of the fish. How would you feel if I walked into your house, ate your food, but just left the remnants scattered about?

I hope to see you all out fishing. Feel free to stop me and chat.