Fact: Mosquito Lagoon is in trouble.

The once pristine estuary in Eastern Central Florida that teemed with life is now in dire straights and needs the help of the angling community to survive. If you have ever fished on Mosquito Lagoon prior to 2012, you would know that it was an amazing fishery full of sport fish and baitfish alike. Within the last two years, the lagoon system has hit a tipping point and cannot sustain the current level of abuse that it’s taking from the ever-expanding Florida population and overtaking of its resources.

The once year-round crystal clear water has been replaced with seasonal algae blooms that turn the water into a coffee-colored mush. Vast schools of happy redfish feeding on the flats have disappeared. Abundant blue crab harvests have also ended. You may have seen local news articles and an NPR article detailing the lagoon issues all along the East coast of Florida from Cocoa Beach down to Stuart; showing the death of manatees, dolphins, and pelicans. These same problems plague Mosquito Lagoon and are prevalent year-round.

These phrases are muttered by all of us. Don’t despair!

There are things you, we, and I can do to better the lagoon and ensure that the estuary is there for years to come so that our friends or even our children can see the same sights we did all these years.

Enforcement, enforcement, enforcement! There is no law enforcement in Mosquito Lagoon. I, or anyone I have ever fished with, have never seen an FWC officer consistently in the Mosquito Lagoon waters for enforcement purposes. We have a poll and troll zone which is frequently abused, as well as tons of other violations from under/over slot fish being kept to unsafe boating on the flats. There is a reason people will never turn on their motors on Snake Bight in Everglades National Park. They know there is a park ranger hiding somewhere around Tin Can Channel just WAITING for someone to do something wrong.

This is not the case with Mosquito Lagoon.

First and foremost, be heard by your appointed officials. There is nothing that gets local governments going more than when people actually begin noticing what’s happening and alerting their officials. When the public begins to raise concern and voice themselves these officials can no longer be ambivalent to problems.

FWC and the Canaveral National Seashore have forms online where you can contact them and let them know what’s going on in their backyards.

Stop harvesting all organic matter from the lagoon. Catch, photo, and release only! It’s that simple.

Last time I checked, Publix had plenty of fish available. You can make any excuse you want to justify keeping fish, from your gas bill to “THIS IS ‘MERICA I DO WHAT I WANT!”. Fact of the matter is that Mosquito Lagoon is an almost land locked body of water only connected to others by man-made or man-improved dredging. It’s infinitesimally smaller than Tampa Bay or the Everglades and it’s surrounded by developments and public access. One day, you’ll be out there “doing whatever you want” and there won’t be a single fish to catch- Then it will be time to complain why no one did anything!

Tournaments which displace redfish should be frowned upon. Non-CPR (Catch, Photo, Release) tournaments should not be allowed to displace fish within the Mosquito Lagoon refuge boundaries and there should be enough enforcement from FWC et al on tournament days to ensure this doesn’t happen. Many redfish within the lagoon never stray from the same 5-mile area where they were spawned, unlike many ocean-spawned fish.

Caught it. Photo’d it. Released it. Done. 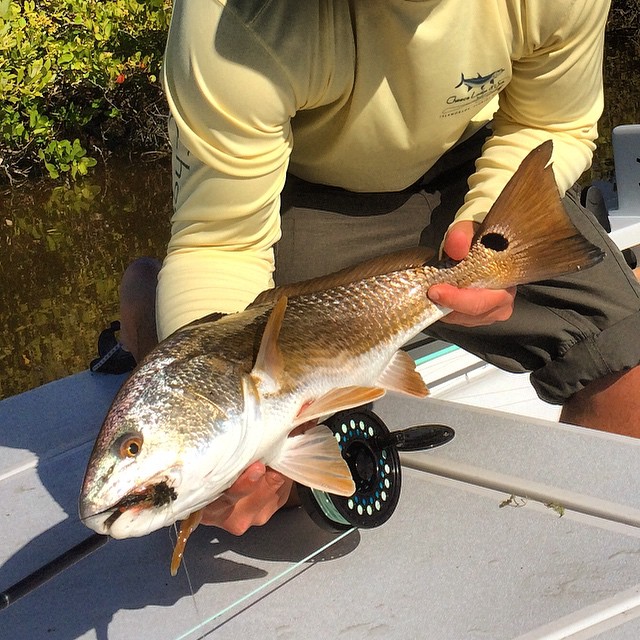 Let’s say there are 5,000 redfish in Mosquito Lagoon. Let’s also say that only 10 fish (which is extremely conservative) are being kept per day on average. That’s 3,650 fish per year removed from the lagoon system. Let’s also say that maybe 2,500 fish are spawned in the lagoon every year from mating and traveling from other sources such as the inlet or the Indian River. Even with the additions, we are still losing 1,150 fish every year! After five years, this leaves us with 0 fish.

Obviously, this doesn’t account for years of buffer spawns or years of extremely low spawning rates, but it lets you draw a conclusion based upon loose estimates to prove a point. 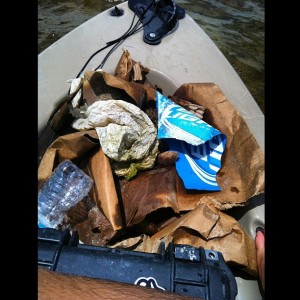 Unfortunately, not everyone is considerate. Sure an empty water bottle or energy bar wrapper will fly out of the skiff every now and then; but there is lots of trash in Mosquito Lagoon that needs to be picked up. Every time I pole the back country I see beer cans and potato chip bags. Each time I see them, I pick them up with my push pole and put them into my sponson “garbage can”.

It’s an easy thing to do that helps the environment!

A group was started on Facebook recently that is speaking of conservation in Mosquito Lagoon. This is a new movement from some young guys and looks to be a promising start:

Save Our Lagoon is another website that was started around the time when Space-X was petitioning to build a new rocket launch site right off the shore in Mosquito Lagoon. The website seems to have been updated recently and has some information on it about what’s happening with the lagoon and some of its issues: