The Beginnings of Jigalode Apparel – Interview with Damian Fernandez

As the third interview installment for us, it’s time to have a few words with the man, the designer, but most importantly the native South Florida angler- Damian Fernandez. You may have seen some Jigalode gear in my instagram and Facebook postings for SkinnySkiff, well, Damian started the fishing apparel company Jigalode in 2012 and hasn’t looked back. Their designs are fresh, stand out from the crowd, and can take you from the stacked fishing flats of Miami to the packed clubs inside the city.

As always, the bolded sentences are us and the non-bolded responses are Damian from Jigalode…

Thanks for taking the time to get back with me about your company. Tell us all how it started and what drove you to create a new fishing apparel brand?

Well, the idea for Jigalode as an apparel brand came from wanting to fuse together two passions, art and fishing. My dad, Damian Sr, was an awesome artist and angler. Growing up, I spent a lot of my time shadowing him in both. Back then, he and his buddy Wayne had started Jigalode as a means of making bonefish jigs for Miami locals. That went on for a bit, but after the jig making had ended, the Jigalode name just became something that stuck with us. We identified with it and even had an old McKee Craft that we dubbed “The Flats Jigalode”.

Flash-forward to late 2012, I had been experimenting with the idea of an apparel brand for some time and it felt only right that I carry on the Jigalode name. If this was going to happen, I wanted the brand to reflect the lifestyle in the right way and be competitive in this market.

So who is your ideal customer? When you first started the company, what was the image you had in your head of how your products were getting used?

When we launched Jigalode at the beginning of the year, we weren’t sure what to expect. We wanted to put out a product that was both functional and simply just cool to wear. The same tee that you wear out fishing in Biscayne can be worn when you hit Brickell out here in Miami for the night without looking out of place in either. Although, you may want to take care of that fish smell beforehand. As far as an ideal customer, I’m not sure if we have one. We just want our customers, whoever they may be, to look and feel good while wearing our stuff. 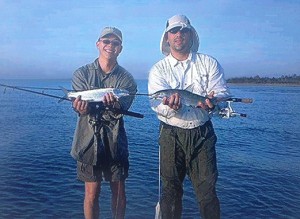 What was the initial reaction from the public when you first opened shop? Did your first clothing line go as well as you thought it would?

The public has been extremely supportive from the start. I didn’t want to go into this with certain expectations. Even before we officially launched Jigalode, when we were beginning to promote on social media and releasing sneak peeks of our gear, we were humbled by the people who were contacting us to find out more about the brand and release dates. Once we launched, it was great to see the public’s reaction and interest in what we had created.

What changes have you made from the first line to the current line of products? Is there anything you’re doing differently with the shirt and hat designs?

We recently released our second wave of designs, so we’re still very new at this. This time around we wanted to have the ladies represented with the new tee and tank. We also tried out different styles of hats with some of our new patterns and flat brims. Jigalode is going to grow side by side with its customers. The products and the designs will develop as a result.

How do you choose your color ways and designs for your products? The designs you’ve come out with have been pretty badass so far…

Thanks man, I appreciate that. I can’t say there’s a method to the madness. It involves a lot of rough drafts and drawings on scrap paper. For some reason, I never seem to come up with an idea when my sketchbook is opened up. The first concept for the Jigalode logo was actually drawn up on a post-it.

You design all the graphics and ideas that go onto Jigalode products…can you give us a run down of how it all comes together? Like, what’s your creative process and how do you come up with some of the designs you’ve released?

It really depends on what fish has our attention at the moment. For example, the concept for our recent “King Crowned” tee came about in the midst of tarpon season. All this talk about the silver king and as far as we know, we had yet to see a design like that. Really, that’s what we try to do…bring you the fish we love; in a way you have yet to see them on your apparel. 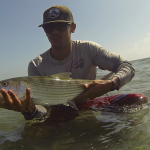 Many of your designs have a real South Florida representative feel. I grew up in the 954 and 305 during the ’90s too, so it’s really cool to see some focus set on that. Things like fishing the metro area bridges for tarpon, the ‘glades backcountry, Biscayne Bay, and even the freshwater Everglades parks on the West side are huge parts of growing up as an angler around South Florida. Is part of your plan to focus on that representation?

Definitely. We all grew up in Miami, on these waters and we draw a lot of inspiration from that. We have one of the most diverse cities and fisheries from the urban canals to offshore so you’ll see a lot of that imagery reflected in our apparel. Our goal though, is to represent every angler from South Florida and beyond, so although we’re deep rooted in Miami, there’s something for everyone.

Do you have any collaboration on the horizon? Special editions, limited colorways, maybe some charity donation runs in the future?

There are some plans floating around about a few artists and organizations we’d like to collaborate with in the near future. We’re eager on continuing to build our brand and relationships with charities and other businesses.

Currently Jigalode is putting out some great microfiber, short sleeve, and hat designs; are there any fresh new products on the horizon that you can tell us about?

We’re really focused on fine-tuning what we’re putting out with our apparel right now.

You can expect to keep seeing a lot of neat gear designs from us. There are some sweet concepts we’ve been cooking up for the upcoming seasons.

Where do you see the Jigalode brand going in the future? The next 12 months?

In the next year I see Jigalode becoming a bigger presence in the fishing community. We want to continue doing our thing and releasing quality products that people enjoy.  We’re really having a good time doing what we love most and we want to continue to share that with everyone.

Again, thanks for getting with us for the interview. Anything else the followers of SkinnySkiff and Jigalode need to know?

No problem man, thanks for having me. I would really just have to say thank you to everyone who has supported us and put their trust in our new company. Keep sending us feedback, we read every email, and comment and we’re continuing to learn from our interactions with our customers. It’s awesome to see this new generation of fishing develop and see more young people taking interest in it every day. A lot of it has to do with sites like SkinnySkiff getting them excited about the sport. It feels almost like a fishing renaissance where people are getting out there exploring waters and creating new ideas. Every day it seems there is a new apparel company to compete with, we just want to keep pushing the limit of our products and stand out from the pack.

Check them out on the web at jigalode.com 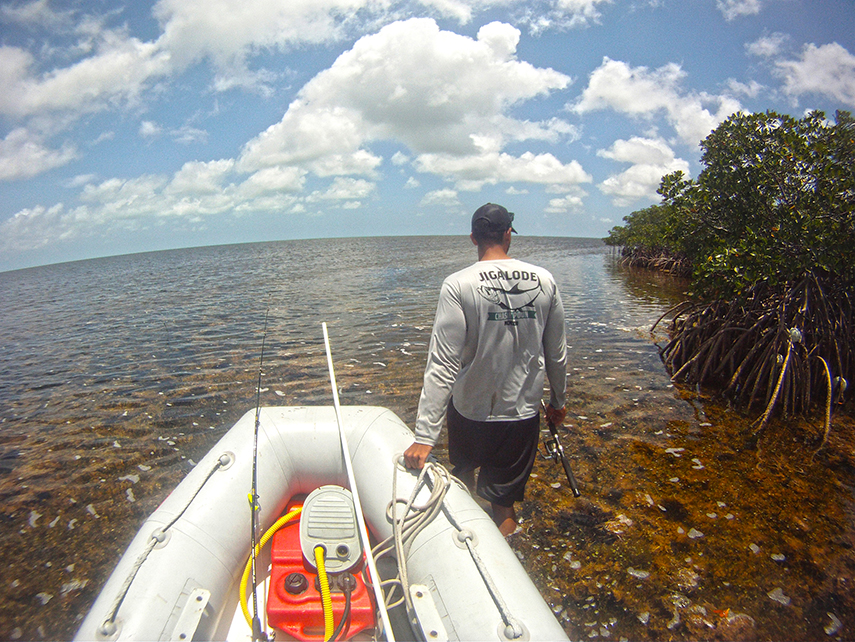