This will be the first half of a two part report on how my recent trip to Islamorada went. The trip was full of ups and downs, victory and defeat. When you think of Islamorada or the Florida Keys, what’s the first thing that comes into your head? Tarpon? Bonefish? Permit? Is it even fishing? Or is it blurry memories of ‘that we don’t speak of’ and Key West…? For me and my recent trip to the Keys, it was fly fishing on the crystal clear open flats of Florida Bay and my first time lobstering out of my own skiff.

My girl and I planned a five day trip a few months ago. We needed a long vacation since we haven’t taken one in almost six months and work has been keeping us busy. Summer was coming to an end so we decided to plan the trip for early September. Initially my girl wanted to go on a cruise to which I protested “We already have a boat! It’s in the garage!” This lead us to plan a ‘fishing’ trip instead of just a simple ‘vacation’. Who am I to complain when your significant other agrees to that! We made our reservations and finally the day came.

We left on Thursday morning and arrived in Islamorada after a five hour drive with some small detours to meet up with friends and have lunch. I met up with Zane, the owner of Icon Coolers, and Eric Estrada of Estrada Art/IamWaseOne in the Bass Pro parking lot in Miami to meet up and exchange a few things before heading down. Icon Coolers is an up and coming company selling a great line of coolers. Keep an eye out for their new 100% made in the USA cooler coming in 2014. 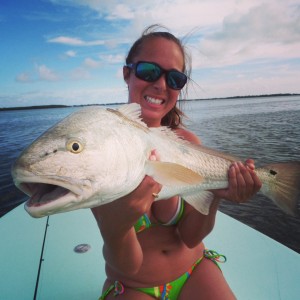 We arrived in Islamorada at 3:30 and checked in. I sat down in the room for all of five minutes before we were out the door headed to the boat ramp to fish for the evening. Better not waste a good three hours of fishing, right? Well, that decision was awesome. Before I even got to the Keys, I got on the phone with my buddy Captain Ryan with CODE RED Backcountry Charters for the lowdown on what was going on with the fish that week. He’s a South Florida native that has been fishing Flamingo and the Keys for years and knows whats going on in the area.

Within 30 minutes of being on our first flat, my girl hooked up with a slob redfish. This wasn’t the redfish we’re used to here in Central Florida, it was silver! Definitely not a ‘red’ fish. The wind was howling at a steady 10MPH so we kept on poling with the wind and it as my turn on the bow (Yes, my girl also poles the skiff. Lucky me!). Another 30 minutes goes by and we see another tail dancing in the sunset, I threw my fly at him and it was on! Only for a minute. The red dug his head down in the sand and spit the hook, unfortunately. We poled for another 15 minutes or so and struck gold- or silver. Two silver tails were right in front of us feeding on the shallow flat. These weren’t redfish, they were bonefish! Finally, the fish I was here to catch. One cast, two casts, three casts…nothing. One more cast and I lined the fish and off they went into the sunset. Turns out the bones didn’t like my fly of choice for the day. Oh well, we had four more days of fishing to do and we were off to a great start. 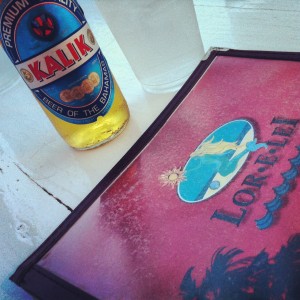 After we pulled the boat up and the sun set down for the night, it was time for dinner at the Lorelei and then back to the hotel for some rest.

Day 2, Friday, was our first full day in the Keys. We woke up and launched the skiff- heading to the same flat as the night before. Unfortunately, the fish didn’t have the same idea. We poled the flat for hours searching for fish only to not see a single one. I saw a nice 50LB+ tarpon roll in one of the channels off in the distance, never to be seen again. That was about it for the fish on this flat. I heard of another spot that was supposed to be productive on the edge of a basin, so I fired up the GPS and made the run into the interior of Florida Bay to find this spot.

I found it, and we poled it for another few hours, only to see one single tailing redfish who wanted nothing to do with my fly or my girl’s gulp shrimp. After that it was past noon so we ate lunch and headed to the ocean side of the keys to find lobster.

This new lobster en devour was also not as fruitful as we hoped, only producing one legal lobster. The wind was once again howling at a steady pace and I didn’t want to chance a microskiff miles offshore. I’m also not the kind of person who dives in the channels or around bridges. Call me a pussy if you want, but I’ve seen too many fish much bigger than me to go poking around the channels and bridges of the Florida Keys. I’ll gladly pay $25.99 for a lobster dinner, thank you very much.

After we lobstered, or lack-there-of, for a few hours, we headed back to the SAME flat and FINALLY- the fish decided to attend. We poled around and found a nice redfish tailing alongside a mangrove chute growing out of the muddy bottom of the flat. My girl made the cast with her gulp shrimp and it was on! She pulled in another nice redfish for the trip. I’ll take one over none any day. Well, one for HER at least. It was the end of our second day in the keys and I had still not landed a single fish on fly. I felt like I was the ‘guide’ for the weekend and my girl was the client catching all the fish.

But the next day, it would get even worse before getting better… 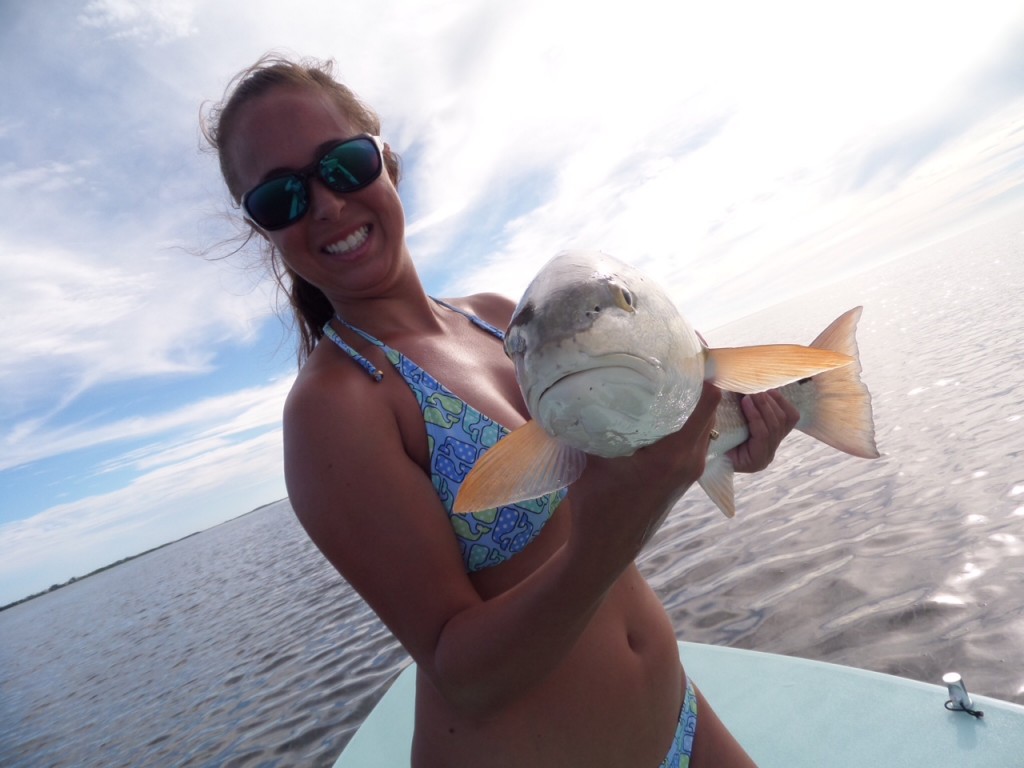