It’s time for part two of ‘Catching the Keys Disease’ which is my recent trip to Islamorada, Florida. Read up on part one here if you haven’t yet.

This time we start on Day 3…

Day three started out just as the second did, or as any fishing trip would. The iPhone alarm was set for thirty minutes before sunrise and the weather report from the previous night still stood tall. Thirty percent chance of rain with an average 6-7MPH on the wind forecast. Not too shabby! But just as that positive note started, it ended. As soon as I opened the hotel room door I could see the storms on the horizon. Thirty percent chance of rain, huh? The weatherman should have just said one-hundred percent and called it a day. Whatever. We were on vacation and a little rain wasn’t going to stop us. This is Florida after all. Rain comes and goes within minutes. We would just head to the ramp by the hotel and outrun the storms all day….or so we thought. 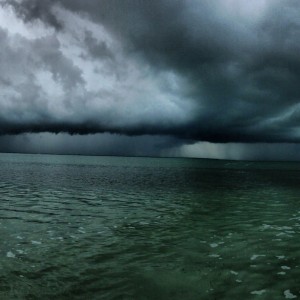 “Show me on the doll where Mother Nature touched you.”

As soon as we got to the ramp, the storm closed in on us. It poured rain for 45 minutes as we sat in the car with the boat halfway in the water. There were others at the boat ramp as well waiting to launch, but were also stuck in their cars from the torrential downpour. After another 15 minutes went by, making it almost an hour total waiting in the car at the ramp, a break in the clouds came. “Let’s go for it!” I said…my girl agreed and pointed out an area or ‘channel’ if you will between the two storms that had just passed. We checked the radar and it showed that no storms were on the other side of the interior of Florida Bay. We launched the boat and gunned it wide open between the two storms.

What a horrible decision that was.

After we passed the storm, we could see a front forming around us from all sides. It was like we were in the eye of the storm…but wait! A redfish was cruising the bank of where we just cut off the motor! That excitement lasted for all of five seconds as we realized the front which was forming is coming straight at us whilst merging the two storm systems. Awesome. It then hit us that we needed to make the run back to the ramp for the afternoon, but this time it wouldn’t be between two storms- It would be right INTO the giant storm system. I jumped up on plane and gunned it again right into the storm. By the way, falling rain HURTS even at speeds of 30MPH on the skiff. It’s like a million needles being thrown at your skin by an army of angry weather midgets. It’s horrible, and I will try to avoid doing it again at all costs. Oh, and there was lightning too!

We finally made it back to the ramp alive and we packed it up for the afternoon. After getting to the hotel soaking wet, my car interior wet and soggy, we hit the bed and passed out for the afternoon. Who knew a sun-less morning could take out that much of your energy. 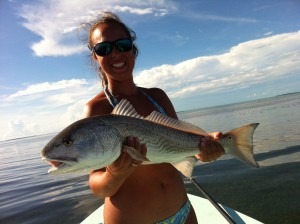 All was not lost on this day. We woke up from the afternoon nap around 4:00PM and the storms had passed. It was time to fish, with a vengeance. Instead of running to the interior again we launched the boat and hit the same flat we did the days previous which was showing promise. Once again, it was holding fish. For the last few hours of daylight we had left my girl managed to hook up with another redfish on her spin rod, and now it was my turn. 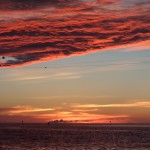 Beautiful sunsets in those keys…

We poled and poled for another hour or so while admiring the sunset with me on the bow, and I finally saw a tail- A silver one! I had another shot at a bonefish and wasn’t going to blow it. Nevermind, I did. I also had another shot at a tailing bonefish shortly after that one, and I blew that too. I now hate bonefish…that was that. We packed it up and headed home for the day.

Day 4, Sunday, was a day of redemption. Sunday is out day as anglers to visit our church, fish church. The outdoors, the wilderness, the water and everything that comes with it.

We woke up and met Captain Ryan from CODE RED Backcountry Charters again. He was with Captain Matt Cox from Extreme Backcountry Charters over on the Southwest Florida coast. Matt brought his new tiller Beavertail Strike down for the weekend and Ryan was with him in his skiff. Eric Estrada (Estrada Art/IamWaseOne) was also out on the water with us along with Warren Chin (@_coachcin_) You can’t go wrong when you’re following two guides on their weekend off, right? Yes, that IS right! 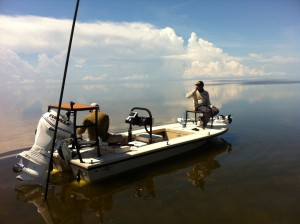 We launched from the ramp and I followed them to wherever they were going to. This isn’t my home turf so I stayed close to their skiff and followed them to the first spot, a nice flat off of a key in the interior. The flat was dead, except for a few sharks. “This flat usually has fish!” Exclaimed Ryan. “But I know where they are when they aren’t here…” So we motored up and headed to the next spot not too far from where we just were. It had to have been less than 1/2 mile before we powered down to a slow planing speed and there they were; tails. “TAILS!” Tails everywhere! HUGE TAILS! The flat we had just stopped on had redfish all over it. It was like visiting a pumpkin patch during Fall when it’s time to choose the pumpkin for your Halloween decorations.

We settled down for a minute and let the fish go back to their normal business after hearing the outboards running in the distance. It was time to break apart and pole this flat like you’ve never poled one before…

Within minutes of poling it was fish on. I could hear the drag on Matt’s Orvis Mirage reel screaming in the distance, and the drag on my girls Shimano Ci4 spinning reel just going crazy. Both skiffs were hooked up and hollering back and fourth. 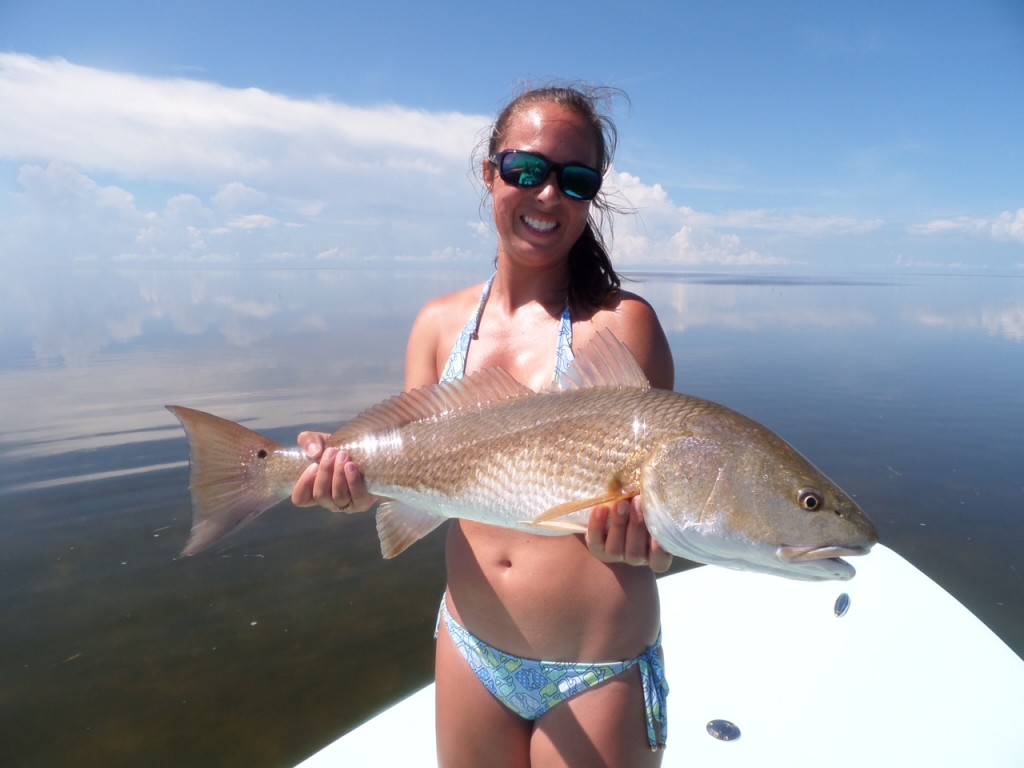 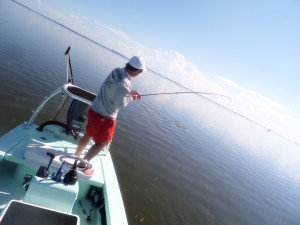 After that, it was switching back and fourth. On and off the platform and the bow of the skiff. One redfish after another…more importantly, I was finally landing fish on fly! After a frustrating three days of ‘guiding’ my girl around, I was hearing the screaming cork drag of my Abel Super7 reel and man did it sound nice. By the way, I only had a 7 weight rod with me. My trusty 7 weight Sage Xi3. This rod is my all-time favorite as of now and can haul in some much bigger fish than you think it’s rated for. The rod is a solid performer and allowed me to haul in some bruiser redfish on this EPIC day of fishing.

I was happy to say the least. The grin on my face after landing the redfish in the photo below on a 7 weight was more than gratifying. It was like a weight was lifted off of my shoulders- And off of my pride. All of this gas, all of the money spent on hotels and food was now worth it. Now that’s not to say I wasn’t happy just being in the Keys catching this wonderful disease and not sitting at work, but you know what I mean. 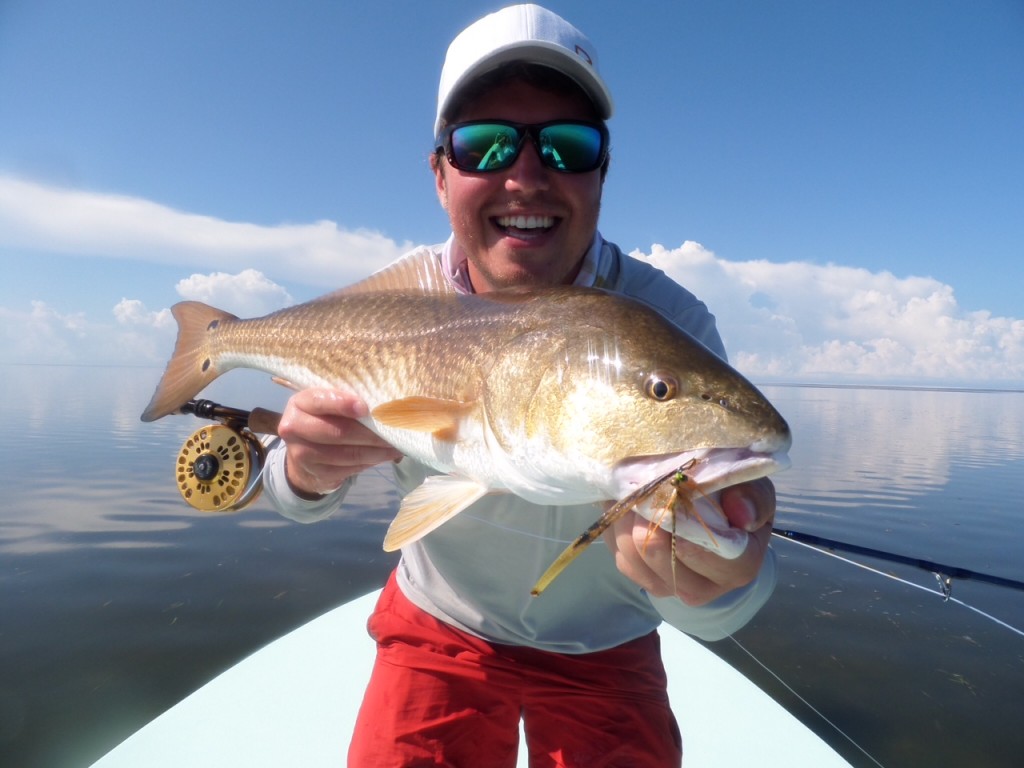 After about two hours of chasing redfish, it was getting tiring and it wasn’t just us. The redfish seemed to slowly dissipate out of view, not tailing as much anymore as they were just minutes before. The tide was going out and the bite was turning off. It was now time for lunch. We poled off the flat, motored up, and ran back down to Islamorada and stopped at the Lorelei to meet up with everyone. It was time for a cold beer, some burgers, and a bunch of stories from the morning. It seems everyone got into some fish that morning… 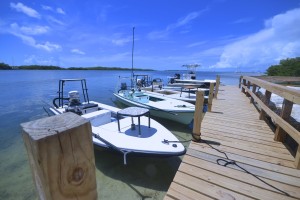 After lunch, we agreed to try our luck on some permit. But to no avail. The permit spot was desolate, but the next flat over was another story! As usual…my girl catches another fish. I was just messing around poling us off the flat when she spots a huge school of redfish pushing a wake up in about 2 feet of water. “Cast!” I said. She made the cast, and picked off a fish from the school. She has come a long way since I taught her how to fish last year, dare I say she is ready to fly fish soon?

After this last fish, the day was pretty much over. Everyone was tired from being out in the sun all day and I’m pretty sure the fish had the same mentality. The school of reds disappeared and we called it. It was full speed back to the ramp.

What an epic end to this Islamorada trip. I can’t say enough good things about the place, from the food to the flats out in Florida Bay. I will definitely be returning to the Keys to do more fishing, and maybe this time not spook every bonefish I see… 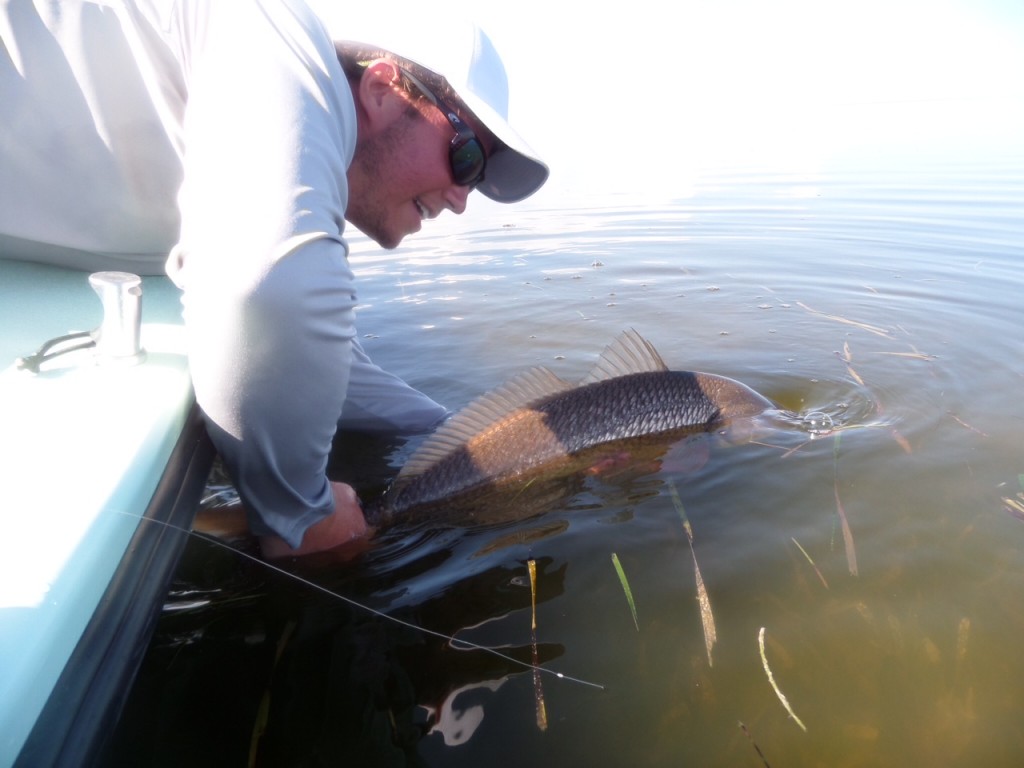