Time for another review! I’ve been busy with work during the day, and trying not to work on weekends. This time our review is with the Ankona SUV17, in my opinion Ankona’s best offering to date. See why below…

The Ankona Native SUV, standing for ‘Sportsman Utility Vessel’ is a time-tested design with a back-story you may not know about. The design of the Ankona SUV is based on an older skiff called the Fiber Craft. It was popular a few decades ago, and in it’s final days was released as the ‘Native Skiff’ (which Ankona retains as the full name of the skiff, the ‘Native SUV17’). Ankona Boats ended up buying the mold the Native skiff and tailoring it to their needs, applying poling strakes and changing some parts of the mold to better suit the modern flats angler.

This leads us to our review of the 17’2″ model of the SUV, the SUV17. The skiff itself is meant to be a skinny water flats skiff with attitude. The sharp v-entry of the bow and higher freeboard on it’s sides boast a bit of big water capability, and it sure has some. The skiff poles shallow and can tackle a sudden up kick of waves from a storm, or some nasty whitecaps while crossing a large bay. Let’s get into the specifics…

*Model tested was rated and approved for a 50HP outboard due to being a center console, and the motor being a 2-stroke (lb. weight/power ratio) which is no longer available for purchase new from outboard manufacturers. 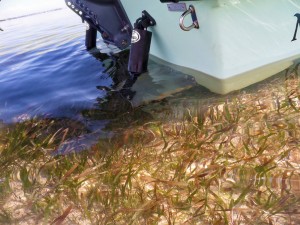 The rear end of the SUV with trim tabs.

The Ankona SUV series is available with a plethora of options, literally. Ankona can do essentially anything you want to a skiff, be it livewells, bilge pumps, rigging, crustacean wells, or just a simple fly fishing setup. Heck, they even offer the boat itself in two distinct sizes. They offer a 14′ model as well as the 17′ model we tested in this review. Both can be had in tiller or center console versions, but have different horse power ratings due to their sizes.

A basic ‘fishable’ package can be bought from Ankona for under $13,000 for boat, motor, and trailer. That’s with a 20HP outboard included. If you want to really push the speed limit of this skiff, Ankona recommends a 40HP outboard. Most customer’s I’ve seen leave the Ankona shop do in fact go with the 40HP outboard, but that also raises your price point by a few thousand dollars. Add trim tabs and rigging, and you’re almost at $17,000. This is an amazing deal and still very affordable for the middle-class angler. Getting a brand new skiff for under $20,000 that is built solid and has the capabilities I’m about to explain below is unheard of these days.

The only option I believe Ankona doesn’t offer for the SUV is a finished liner like the Copperhead and many other high-end skiffs have. That’s just extra weight and we want to float skinny anyway, right?

I would rate the overall performance of the Ankona Native SUV to be a 4 out of 5 stars. I really love this skiff. After using it for the past 9 weeks or so, it really has grown on me. For those who know me, I am a skinny water angler at heart. I love finding fish sticking out of the water. Sight fishing is my version of hunting, and the fly rod is my rifle. I don’t buy skiffs that don’t get into disturbingly skinny water, period. This SUV does it. You may be dragging the poling strakes a bit, but you will be able to float this skiff over 5″ of water with no problem. 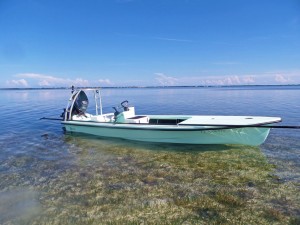 Sitting pretty on a 4″ flat in the Keys.

Cruising and getting up on plane is also easy with the SUV. I know that hole shot is dependent more on the motor, since 2-strokes have better hole shot torque than their newer 4-stroke cousins, but this SUV17 performed flawlessly when gunning out of the hole with this Yamaha 50HP 2-stroke. It took maybe 10 feet for the boat to jump up and get out of a tight spot. This proved to be useful last week during my trip to the keys, where we were stuck on a flat with the tide lowering by the minute. I was able to find a 10’x10′ sand hole and jump up on plane to escape.

The average top speed at wide open throttle  of the model tested was between 36-38MPH. This is with an actual gear and two-person load. Cruising speed was plenty fast and kept the boat on plane without any trimming of the tabs, too.

Using the boat as a center console was really neat. My last two skiffs were tillers, and having a steering wheel and throttle makes the boat much more controllable in big water situations and when making long runs. Having trim tabs is a must, personally, on all boats I own from now on. Being able to point the nose down on the SUV was great, as well as being able to balance out the weight on this skiff which isn’t terribly wide to being with.

The skiff is pretty dry all-in-all. The only time you will get wet in an SUV17 is when crossing big water at an angle, aka ‘quartering waves’. This is inevitable in any skiff, so I’m not going to chastise the SUV17 for this one. It’s really not a wet boat, sure you get some spray but I am impressed by it’s ability to stay dry overall. Most of the spray I experienced came over the rub rails around the console area, so if you just stand up and run the skiff with the center console, you will be left ‘high and dry’.

One thing I did notice about the SUV, which is an inherent flaw of sharp v-entry boats like the Pelican 17 I did a review of, is that it has bow-steer. When quartering waves, or crossing parallel to some fairly large wave sets, you will get ‘steered’ by the bow of the boat and be forced to correct it. The bow of the SUV is great at entering waves at certain angles, but at others, it becomes a huge pain in the ass and if you’re not careful can throw your passenger off the boat.

Poling the skiff was phenomenal. The only negative I found, was that the hull is so light (<350lbs.) that the wind can sometimes use the people standing on the skiff as sails and turn the skiff with it. My general scale for if a skiff is easy to pole or not is; “Can my girlfriend pole it?”. Just kidding, but sorta. My girl is pretty good at poling a skiff. She had no problem poling the Ankona ShadowCast when I owned one, and this one was also easy for her. As for me, this skiff was like pushing a Gheenoe feeling-wise. It glides effortlessly and poles straight.

It’s also pretty quiet! There is some hull slap, but not allot. If you are parallel to those pesky tiny shopped up surface waves on a flat during a light wind, you’ll hear some hull slap. For the most part, I was seriously surprised at how little hull slap I ‘noticed’. Mind you I wasn’t looking for it the whole time, but there are some skiffs out there where I will actually stop fishing and say “What the hell is that noise!?”.

Crossing Florida Bay and the Indian River during a tropical storm are two of the trials I ran this skiff through. Right when I got the skiff was when the last tropical storm landed offshore in Central Florida, leaving me with 15MPH westerly winds. Launching from the East of the Indian River, well, just plain sucked. With my new SUV17, though, crossing was a breeze. Don’t get me wrong, I got wet and I got pounded, but the SUV stayed tight and got me to the eastern shoreline 3 miles away. In the Keys, I got the pleasure of driving the SUV through two merging storm fronts which opened up right on top of us. This was tons of fun (read: sarcasm) and the SUV once again got us to our destination in one piece.

I never took the SUV17 out of the inlet, but I’m sure it can handle days off the beach if you pick your days. I’m not saying it needs to be dead-calm, but any normal day off the shore should be an easy task for the SUV17. The extra few feet of the 17′ boat over the 14′ boat model will allow it to cross waves much easier and fill that gap in between wave sets. This goes for inshore waves as well.

No? Sure? Maybe? I hate this question. “Is a skiff tippy?” is like asking “Will that fly rod tire my arm out?”. It’s all dependent on the user. I have seen people dance around a Gheenoe NMZ like a ballerina hooked into a marlin, and I’ve seen people three feet away from me fall off the rear deck of a Maverick HPX18 in glass-calm conditions. ‘Tippyness’ is all relative, and I would recommend testing the boat yourself before you buy it, this goes for any boat. I did a write up here on what to look for when choosing a skiff.

I understand some people may have balance issues, be older gentlemen, or may just be a heck of allot bigger than I am (180lbs)…I would recommend a wet test of ANY skiff!

In conclusion, this is a great boat at a great price point. It does allot, and backs it up with performance. It has a million options to suit any angling style, and can get you to your favorite fishing spot with ease. 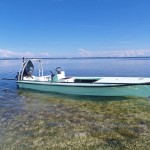 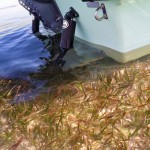 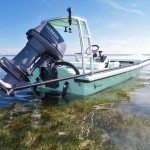 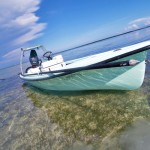