For the last two months I’ve had my hands on a sweet new combo from Redington to use out on the lagoon flats here in East Central Florida to fish for reds. I’ve been looking for a versatile 8 weight setup for my friends and myself to use when out fishing the open flats. Something that an experienced user would be happy to whip around, but also a setup that can be used by my not-so-seasoned fly fishing friends who prefer the spin rod. This combo came in the form of the Redington Delta reel and Redington Vapen “Red” rod (which I will write about in a separate article so I can better define my feelings on both of these items). But that’s enough intro, let’s talk about the reel… 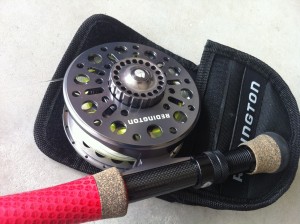 The Redington Delta series of reels is what I would consider the flagship of the Redington line due to their price point. The most expensive Redington Delta reel comes in at $259.99 which is an extremely respectable price point for such a nice reel. The reel comes packaged in a modest red and tan colored cardboard box which looks to be made of recycled material which is awesome and forward thinking of Redington. Inside the box are the usual registration cards, and a beautiful Redington Delta reel sitting inside of a black padded reel case. Now this isn’t your run of the mill reel case. It’s one of those nice velcro ones that goes over the entire reel seat and is sewn to match the size of the reel. This might be a weird item to praise off the bat instead of the reel itself, but a good reel case being included with a reel is in my opinion how the manufacturer shows that they care about this product and want you to protect it. This is the same reel case that Abel and Orvis (used to) include with their top-end reels.

After unboxing, holding the reel itself shows how well machined and polished the reel is. There are no sharp edges on the reel to cut yourself on, or your line. The drag knob is huge! It’s great to see another manufacturer make a nice large drag knob that you don’t need to look down at to feel for when adjusting your drag. The knob is machined out to reduce weight, as well as knurled during that process to give you a good grip when attempting to adjust the drag with wet hands. The knob itself is east to turn and provides plenty of adjustment room for a loose to tight drag strength.

The reel comes in a nice gunmetal grey-type polished finish. For you weirdos that think a gold colored reel or something like that will scare off the fish, this reel has a finish that shouldn’t cater to those fears. On the opposite side of the drag knob, is the release button for the spool- also easy to use and operate in a pinch. It’s a pretty standard spool ejection mechanism with that little metal tab you push in.

The reel itself in this 8 weight version weighs 7.7 ounces according to the specs on the Redington website. This isn’t bad, and is actually an improvement of 0.5-2 ounces compared to the old CDL reel (also according to the Redington website). This is slightly heavier still than the Orvis Mirage IV reel I wrote about recently, but is still lighter than reels such as the Abel Super 7/8 series. In all honesty, if you’re an infantry soldier then 6 ounces might matter to you on your rifle, but if you’re fly fishing and you can’t handle a 7 ounces reel versus a 4 ounce reel like the Nautilus FWX I think some gym time is in order.

More photos of the Redington Delta: 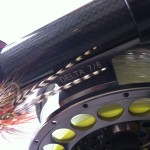 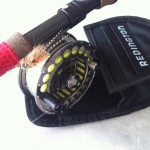 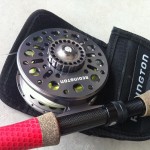 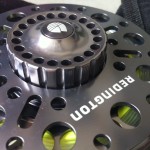 Let’s see how this guy performs!

After molesting the reel for some time, I lined it up with 150 yards of backing and tied on some Monic Clear Tropical WF8F I had laying around in the garage. The line selection is going to have more of an effect on the rod and not so much the reel, so stay tuned for that Redington Vapen “Red” review coming soon.

What happens when you head out in search of fish on a new boat with new gear? You catch fish of course:

The Redginton Delta ate that fish up with ease, obviously. It wasn’t a huge redfish, but it pulled on the drag none-the-less. That was about the average size fish I was catching in the lagoon backcountry during the Summer to Fall transition this year. Unfortunately I wasn’t able to find any reds that were much bigger, but maybe I’ll update the SkinnySkiff instagram feed with some new photos of a nice fat red this winter while using this combo so look out for that!

After the fish hit, I set the hook and let him do the initial run and then reeled up my slack. The Redington Delta took all of the line in without a hick-up. None of the line got caught on the reel handle, drag knob, or anything else on the reel. The drag on the Delta is audible and easy to adjust as I mentioned earlier. Again, noting that this fish was not a trophy by any means, it took the drag on the Delta for a run and the reel handled the reds runs with ease (see video to the right). Each time the fish ran it was smooth, there isn’t much more I can ask of a drag system in a reel of this caliber.

I brought several fish that size to the boat over the course of a few weeks, and after each use and wash-down, the Delta is still performing as if it was new.

For the price of this reel, I think Redington has hit a home run. The reel looks nice and also performs even nicer. If your main fare is saltwater flats fishing where redfish, snook, and tarpon can surprise you at any turn- in my experience this is a great reel to get you going. Before I forget, let me mention that Redington has a great warranty system too. If anything goes wrong with your product, they will stand behind it 100% and get you fixed up in no time. One of my buddies recently sent in a Redington Predator rod for service, and they sent him back a brand new one with no questions asked!