Another review just in time for the holidays, this time with the Cheeky Fly Fishing Mojo 425 reel. Cheeky Fly Fishing is a newcomer to the fly reel market. In 2009 they set out to bring great performing reels to anglers at a great price, and so far they seem to be doing pretty good!

I got in touch with Cheeky to see if I could get my hands on one of their reels. Lately I’ve been seeing allot of photos with anglers using Cheeky fly reels on my instagram and Facebook feed, so naturally I needed to see one for myself. After speaking with Scott at Cheeky through a few emails he sent me over a demo reel to mess with for a few weeks. I received the reel in a well packaged USPS shipping box that contained the reel and reel case. Upon first glance when I opened the box I said “WOW…it’s orange!”. I’m not sure if it’s just this model of Cheeky reel, the Mojo 425, but the reel case it came with was basically hunter orange- the same color you would see on high visibility vests. Rest assured, I wouldn’t be confused as to which rod under my skiff gunnels was rigged with the Cheeky reel with the use of this reel case.

The reel case itself is a standard neoprene wrap-around style with velcro. It doesn’t feel cheap like the reel case that some low-end reels ship with so I was happy about that. 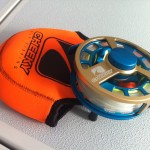 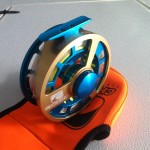 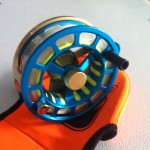 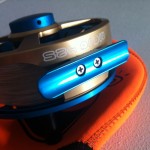 The Mojo 425 at first glance is a really cool reel. Straying from the standard style of the flat-sided Billy Pate reels of my childhood, the Cheeky reel boasts some sweet aesthetics. The machined reel has most of the original bar-stock aluminum cylinder machined out in a modern pattern. The spool is also machined in the same way and together they make a nice looking reel that you can tell is at the top of its class in design. The Cheeky line of reels comes with their model name and number laser-etched into the top of the reel body adjacent to the reel’s foot, as well as the Cheeky logo laser-etched onto the side. 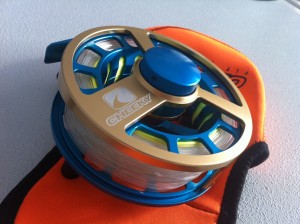 The mounting foot and the drag knob are both also machined very well and screw into the reel seamlessly. If the reel wasn’t two different colors, you would almost thing that the reel was one piece. I say this because these days, manufacturers can get ‘loose’ with their machining tolerances. Cheeky has a very good eye for QC and each part looked like it was made specifically for the piece next to it. The drag knob itself has a pattern so you don’t have to worry about your hands slipping on a smooth-sided knob when fighting a fish.

The Cheeky website for the Mojo 425 boasts that the reel is a ‘lightweight’ 7.0oz. I would agree with that. Most ‘classic’ 7-9 weight fly reels will be around 8oz so they shaved a whole ounce off the reel weight there. It’s a large arbor reel which helps you get a hold on fish who decide to charge at the boat, or any other situation where you would want to bring your line in quickly.

The quick change spool design is similar to the Orvis Mirage fly reel I reviewed here a few months ago. It’s a thumbscrew design which takes one swift turn of the knob and the spool is able to be removed from the body. Nothing too fancy here, but in my opinion is a much better design than the metal-tab-sticking-out-thing that some companies use.

My only neutral comment about this reel is the color way. The Mojo 425 is currently available in two color ways which are standard silver and two-tone yellow/blue, where the ‘yellow’ is more of a champagne or gold tone. The two-tone yellow/blue wouldn’t be my purchase choice for the reel, but it sure does stand out! It actually grew on me over the course of fishing it a few times. A flat black color way would be really push me over the edge to declare this one of the sexiest reels I have ever put my hands on…hint hint Cheeky!

So let’s talk about the guts of the reel and how it performs. Unfortunately for me I wasn’t able to land any fish with this reel. I know, I can hear the worlds smallest fiddle playing in the background….but I did get to stand on the bow for quite some time with the reel so that’s something I guess. Maybe Cheeky will send me one of their sweet new flat black colored reels they’re going to make after reading this article, so I can use one longer! (Another hint guys!) I lined up the reel with 150 or so yards of 20lb yellow dacron backing and some Monic Clear Tropical WF8F line that I had laying around from the previous review of a Redington Delta reel, all of which spooled up perfectly on the Mojo 425.

What’s the first thing you do when stepping up on the bow when it’s your turn? You mess with the drag, drag knob, and start tearing out line to get it stretched out for the day. The first thing I noticed when messing with the drag is how tight the drag knob felt- in a good way. Not tight as in hard to turn because the drag knob was smooth as can be between each small and concise click, but tight as in really well built. There was no way this drag knob was going to fly off or fail. The drag system itself is also really robust and with each arms-length strip of the fly line out of the reel I could feel the drag fighting back against my arm’s motions, quickly starting and stopping with each amount of pressure I applied to the fly line. These are also good aspects of a reel. Even at a fairly loose setting, the reel didn’t backlash while stripping out line. The adjustment range of the drag knob was nice too, taking only 1 1/4 turns to fully adjust the drag from tight to loose.

Even though I didn’t get any redfish to tug on this reel while I had it, I definitely liked the reel. If this was a purchase I had made I would not regret it one bit. Cheeky is making solid reels at a solid price. Pair that with awesome communication and customer service for warranty work if the need ever arises, I think they are on the right track.

If you’re in the market for a new reel, check Cheeky out! 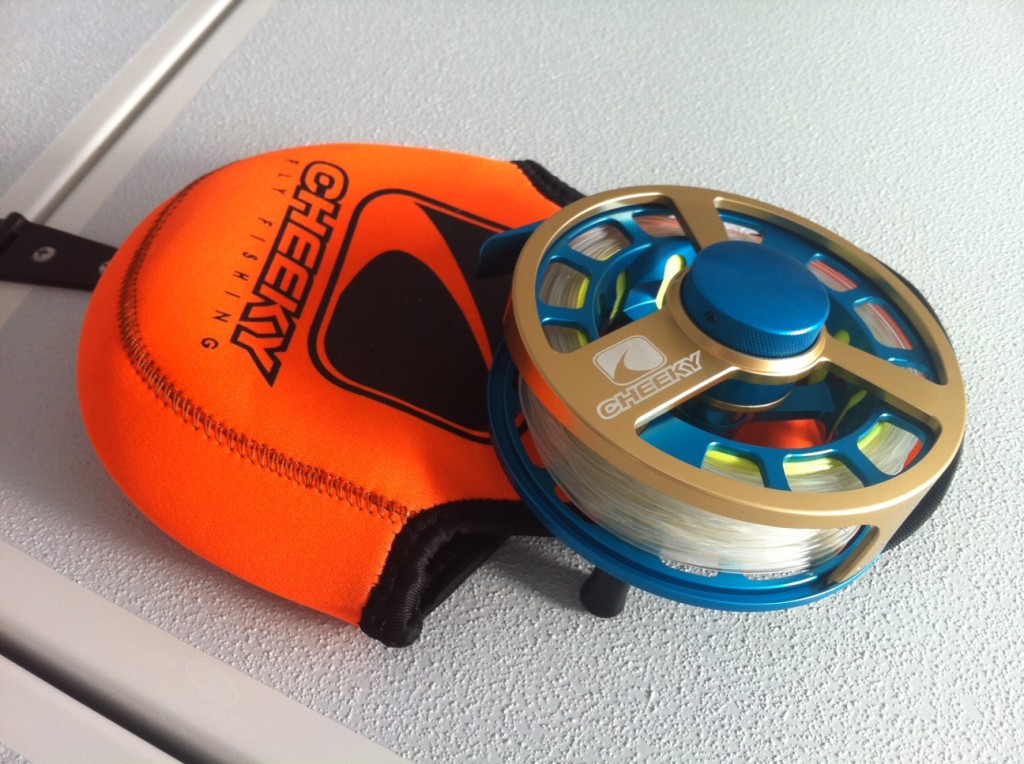