A Weekend At Harry’s

Only a week after I returned from Islamorada with a friend to pick up his new Maverick HPX-S, I got a call from Harry Spear asking if I could drive up to the Florida panhandle to come fishing with him for the weekend. The first thing that came to mind? “Does a bear shit in the woods?” It’s not only an interesting thing to happen because it’s two trips for me in two different directions, in two consecutive weekends. Harry Spear actually gave the initial input for the Maverick HPX to the owner of Maverick Boats, and in return he named the skiff series after Harry (the ‘HP’ in ‘HPX’). Life is funny like that sometimes.

I left work early on Friday to make the 4.5 hour drive to the Panhandle from Central Florida and got to Harry’s place just in time for bed. We had a full day of fishing ahead of us but we didn’t know just how good it would be.

I’ve never fished the northern part of Florida before. My angling range so far in life has basically been from Central Florida down to Islamorada and Chokoloskee, etc. I’ve seen photos of the scenery north of me, and I’ve been yearning for a chance to fish it. Huge patches of spartina grass, oyster beds, mud flats, creeks, sand bars; lots of feature combinations that I don’t usually see here in my home waters of Mosquito Lagoon. The panhandle is truly a sight to be seen- and of course- fished. 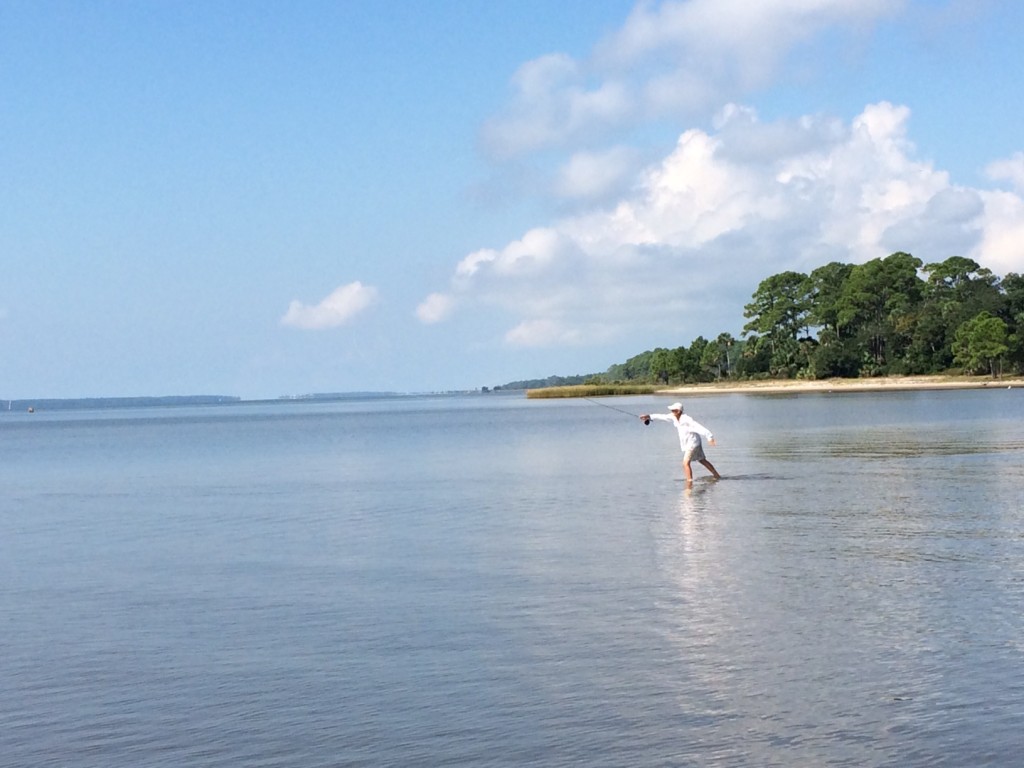 We started the day off poling long shorelines of sand bars and spartina grass, with the occasional wading session to catch fish in INCHES of water. These shorelines held tons of redfish. These were hungry redfish that have seen virtually no pressure. The fish on this shoreline were insane, they would spook off from seeing us first, and then turn around the second you threw a fly in front of them only to engulf it like they were starving. There was no way they were starving! The water all around us was full of small shrimp jumping left and right. 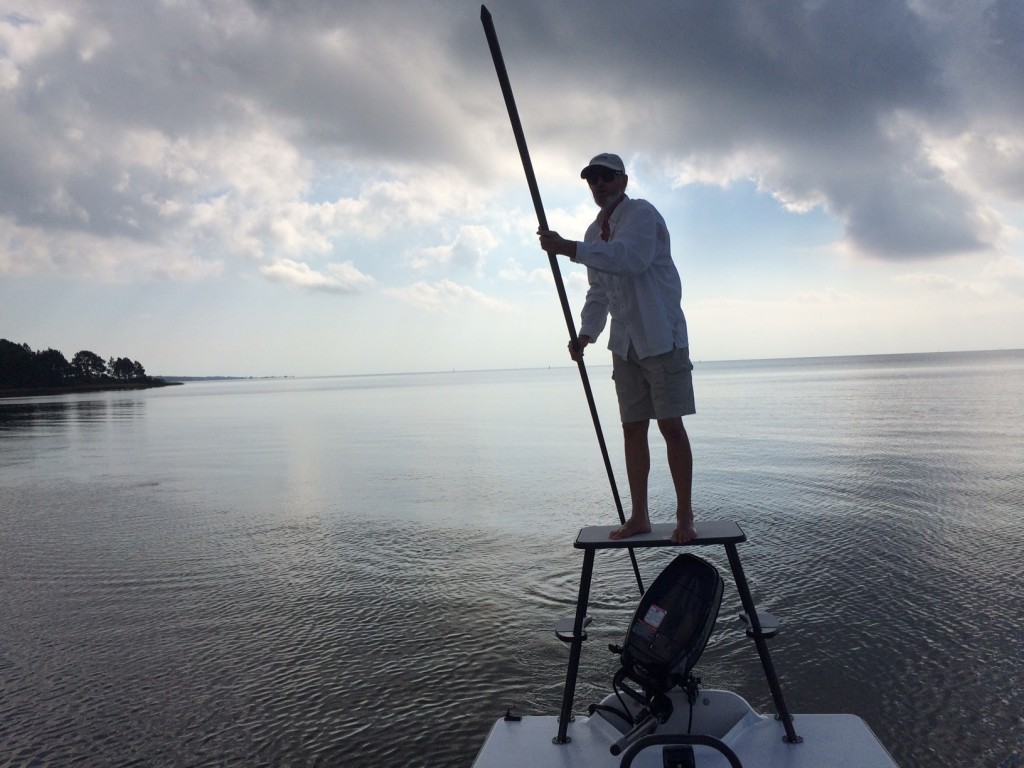 After hooking up with some lower-slot redfish, we poled along another bank with flooded spartina grass. Just like the flood tide that I’ve seen photos of, this was a simialar situation. I was searching tirelessly to see a group of redfish cruising the shoreline and looking for shrimp like I see in the photos and videos other people post of the fertile shorelines to my north. I was in luck. 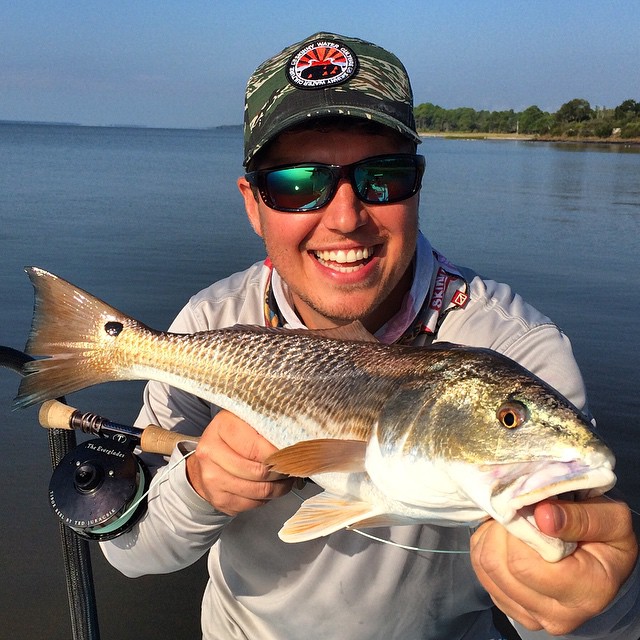 Not 15 minutes after we poled this new shoreline of spartina grass, a pod of redfish was cruising the edge busting up small shrimp all over the place. That was a sight to be seen.

After that, we moved to another shoreline that Harry said was holding fish the previous day- boy was he right. Within minutes of turning the motor off and poling we were seeing tailing fish all down the bank- but there was something better up ahead. A huge pod of balled  up redfish tightly packed into a small group. THESE were happy fish, just tailing away and decimating all crustaceans in their path.

Horrible zoomed in photo of that: 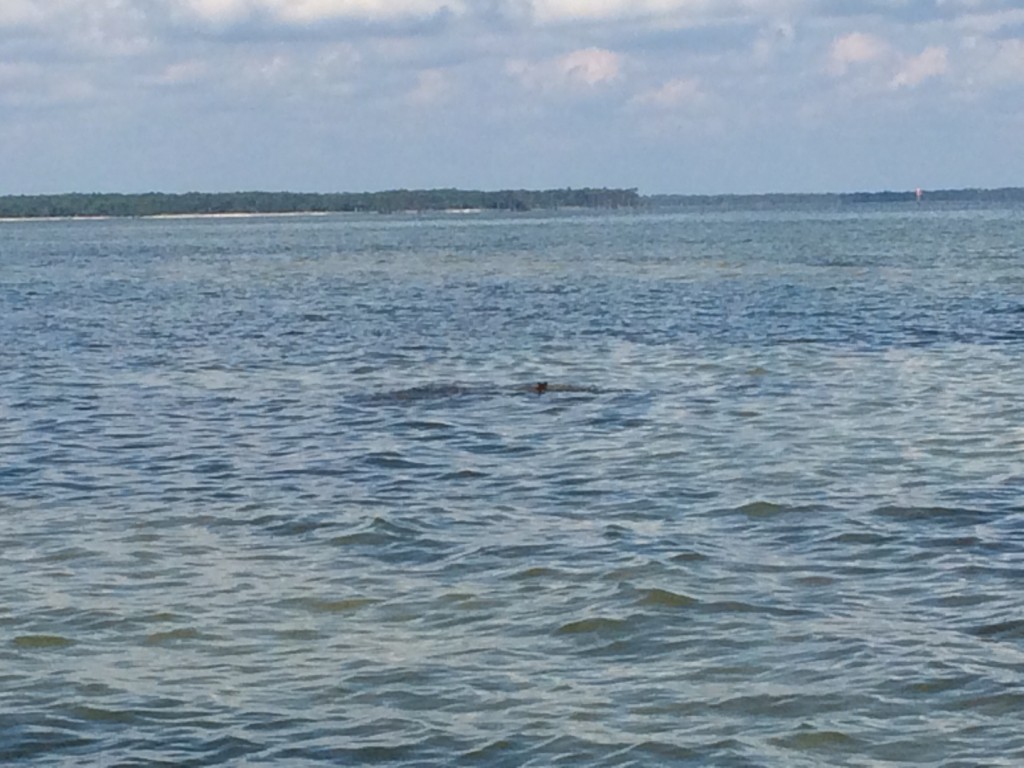 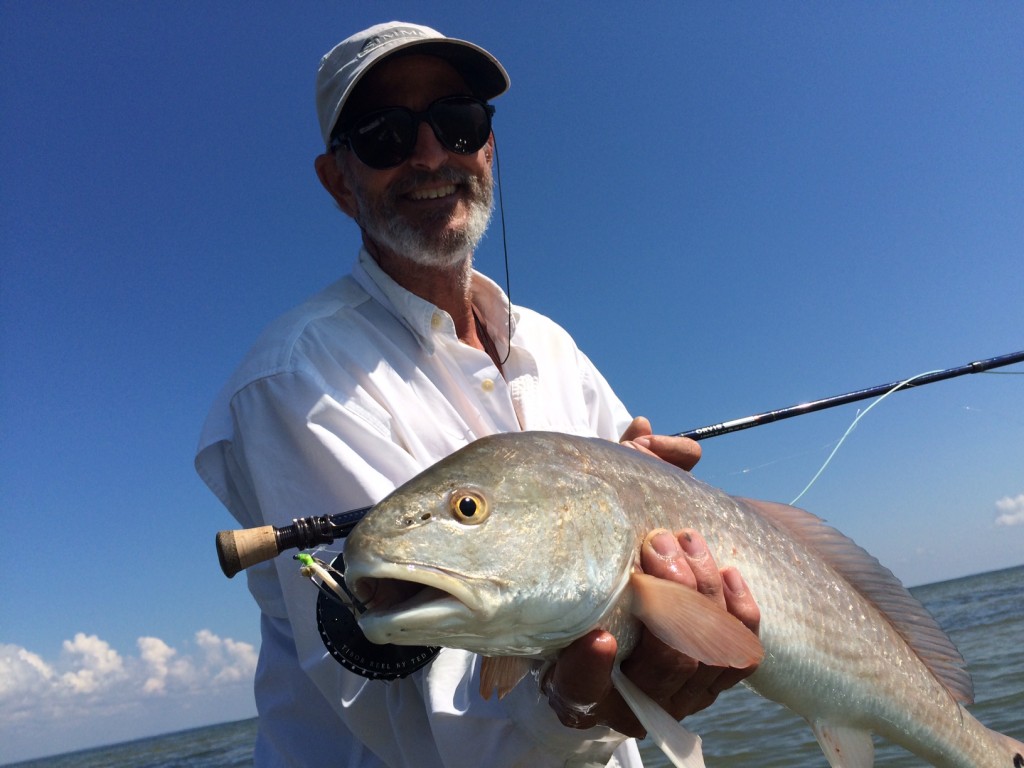 And of course, Harry with a nice redfish from that pod.

After our redfish adventures, we trailered up and drove to another spot. This wasn’t for redfish. This was for tarpon. As we drove out to this spot, the after got deeper and deeper. We crossed the bay and got to the specific spot were Harry wanted us to be. An anchor was throw, and he position us. “Now we wait for the tarpon.”

Not long after anchoring at this spot, tarpon came swimming past the skiff. I couldn’t believe my eyes. “Matt, to your right!” A huge tarpon cam right up to the boat, but we were one second too late. The fish had come too close and seen us in between the sets of waves. Just as he appeared, he swam off in a boil of swirling water. Lucky for me, my first giant tarpon on fly was about to come to fruition. 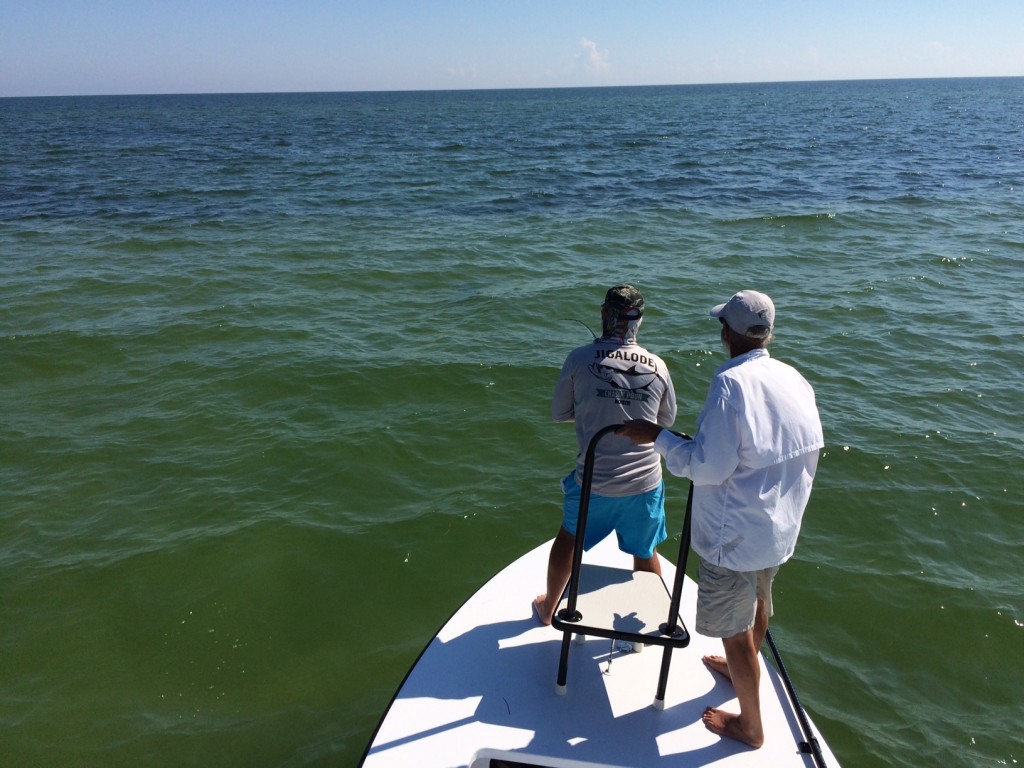 Shortly after that, a pair of tarpon came swimming over a small grassy spot and just hovered on top of the water column. I made my cast and like a slow motion move, that to this minute is still playing in my head, he was hooked. Strip, striiiip, strip…BOOM! The rabbit hair fly disappeared in the water with the huge suction of the tarpon’s mouth on the surface. Not seconds after that- the first jump. The gigantic 100 pound megalops almost leaped into the boat in front of me as he realized he was hooked. I horribly managed my slack fly line, and into the backing the fish went. The drag was screaming, and I finally had my first giant tarpon on fly.

In that moment, another angler’s life was ruined by a giant ancient silver fish we call the ‘tarpon’. After this experience I’ll be chasing these fish to the ends of the earth. My woman and my wallet will probably hate me for this- but it’s worth it, right?

Many stories were told, and much was learned by me. I have to say that this was the most fun I’ve had on the water in a long time. Harry is a super cool dude and has experienced more as an angler thus far than anyone I know. Fishing with a legendary angler such as him was an amazing experience and I yearn to pick up the phone one day in the future with the caller ID reading “Harry Spear” and the first words spoken being “Matt! Wanna find some fish?“