A few weekends ago I got to fish with Harry Spear. While I was up there in the Florida Panhandle – fishing, learning, and watching – I got a chance to fish on one of Harry’s skiffs dubbed the ‘Low Tide Guide’ for a few days. If you don’t know, Harry Spear is a legendary fishing guide from the Florida Keys who has fished on essentially every flats skiff imaginable and guided to Grand Champion awards in the most prestigious tournaments in Islamorada. He has also helped pioneer the fly fishing and shallow water skiff industry in the 1980’s and 1990’s when new lighter weight fiberglass boats were just coming to market. He even gave the original input and specs for the Maverick HPX series of skiffs, pretty cool if you ask me!

Almost a decade ago, Harry moved from the Florida Keys to the Panhandle raise his family and make boats for a living which prompted him to start Spear Boatworks. Better than any of my words can describe, take a peek at the video below to learn more about Harry and Spear Boatworks from the man himself…

…and there you have it!

The skiff we’re looking at here in this write-up is called the ‘Low Tide Guide’ or ‘LTG’ as you saw in the video above, or for part of it. The LTG is a ‘technical’ poling skiff- plain and simple. Harry Spear has been poling the flats for decades and knows what is needed for a shallow water skiff to perform. I was able to talk with Harry at length about why he created the LTG and what went into its production as we stood on the platforms waiting for a tarpon to swim by and grace us with its presence. The Spear Boatworks Low Tide Guide has many design considerations that we’ll go over, but first here’s the specifics from the Spear Boatworks website:

You get all your basic measurements there. What might stand out to you is the draft number of 7.5″. Many manufacturers weigh their boats differently. Some weigh skiff hulls with no cap or accessories, some with a cap and accessories, some with a motor, etc. There is no industry standard for measuring what a hull will draft. When you are purchasing a skiff, it’s best to wet test it beforehand so you can measure for yourself and put the skiff through conditions you would likely experience during your daily usage of the boat. With that said the 7.5″ draft estimate for this skiff is a no bullshit truthful measurement of a fully loaded skiff with three anglers.

Through my usage of the LTG during that weekend, I would even say that Harry is being generous and it’s actually a 6″ skiff. In all honesty that’s all you need to catch really skinny fish. If you’re any shallower than 6″ of hard and bottom, then you’re wading! The LTG’s draft is actually not in the transom but in the bow. The belly of the bow is extended to allow for comfort in all types of water crossing and also types of fishing. Let’s say you’re anchored up for tarpon- this skiff can do it without getting swamped! The bow actually rubs on the bottom while poling super skinny before the transom area does.

See the photos below for photos of the skiff as well as a resting draft photo with no persons in the skiff: 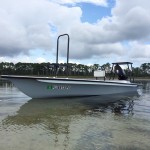 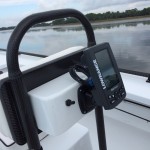 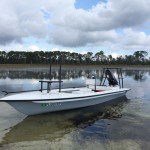 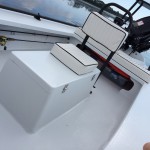 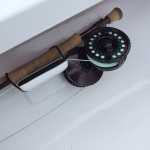 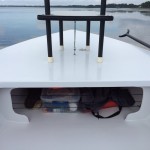 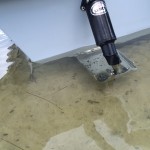 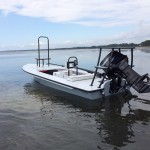 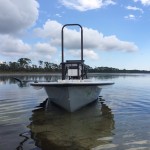 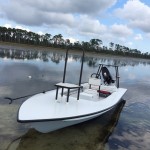 The skiff performed well in all tests that I tried to put it through during the weekend. We got the skiff to pole shallow, run shallow, run in a chop, run through an open bay, pole for over 500 yards, and anchor up for tarpon fishing. This skiff really can do it all. The boat was also remarkably dry. If you look at the photos above you can see the large spray rails which are molded into the bottom of the cap. These rails capture 95% of the spray you would normally get in the rear of the skiff when crossing a bay or going through a chop at a 45 degree angle. I said 95% because there is no such thing as a 100% dry boat. I got a few drops of water on me but nothing major. I was pleasantly surprised.

Also notable in the photos above is the lack of a hard chine angle and integrated spray rails on the side of the skiff. You want a quiet skiff? The Spear Boatworks Low Tide Guide has nothing on the sides of the skiff to ‘slap’. If you’re poling parallel to some moderate wind rip on a deeper flat you may experience some hull slap due to the fact you’re not hovering over the water on your hover-skiff but on your average redfishing flat you won’t hear a thing. 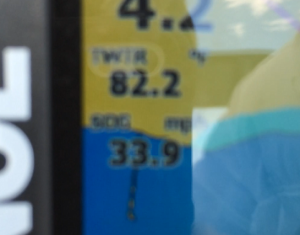 Speed is always a factor. Some of us like to emulate Ricky Bobby out there on the water. The LTG pushed us to 34MPH (33.9 as per the photo on the right) on the flats with a tiller Tohatsu 50HP and a PowerTech propeller. Minimum tabbing and protected water was needed to get this top speed but you get the idea. The skiff ran smooth and cruised at this top end nicely.

On the pole this skiff really shines. You know it, I know it, and Harry knows it…if you’re serious about fishing the flats then you need a skiff that can pole easily and keep up momentum. This skiff poles great and is a solid performer while on human-power. I’m not going to use stupid salesman phrases like “This thing poles like it’s on rails!” or “This skiff poles like a dream!” due to the fact that in my fishing dreams I’m not poling at all and I’m standing in the middle of a glass calm flat surrounded by tailing fish and a case of beer- but that’s for another article. What I will say is that this skiff is extremely easy to push, spin, keep momentum, and maneuver just about any way you want.

Do you like chasin’ ‘poon? This skiff not only gets skinny, but is also optimized for tarpon fishing and has been tested in the open water bays of the Florida Panhandle. Harry went through a few design changes when creating this boat and one of them was to get the bow just right for poling large waves over deep water and anchoring up in them. While we were anchored up and poling the outside edges of deep water shoals looking for tarpon, the skiff never once got swamped or took on any water. I even jumped a 100lber, too! 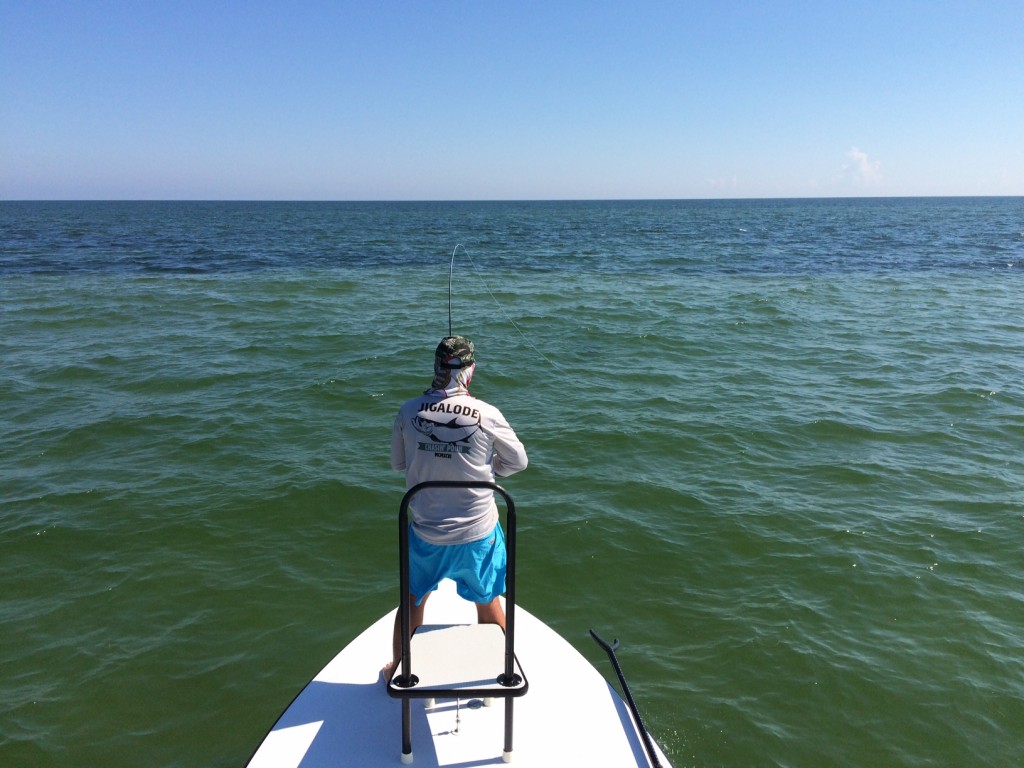 Harry is making these skiffs like Chris Morejohn used to make the old Whipray’s when they were first starting out and making hardcore flats fishing skiffs for the working fisherman that wanted to venture to the ends of the Everglades. No liners, no fillers, and nothing you don’t need. Harry probably won’t like the fact that I’m comparing his skiffs to ‘those ones’- but I’m doing it for good cause and to convey what he’s doing.

Harry is making skiffs that remind me almost exactly of what is so sought after these days and something that people are now paying out their teeth for. Have you seen the current used prices for a 1999-2002 early model Hell’s Bay? They’re reaching ridiculous clown levels and people are still paying it!

What you see here at Spear Boatworks is that same beginning. True technical flats skiffs that will get you where you need to go and do what you need to do with proven design characteristics. Skiffs that are made by hand in a small shop and custom built to catch fish. If you’re looking for the new wave of flats skiffs built by a legend, then this is your golden age.

Visit Spear Boatworks at http://spearboatworks.com or call Harry himself at 850-545-8578 with any questions you may have.