The Lagoons Are Not Alright

If you’ve fished in Mosquito Lagoon or the Indian River any time within the last half-decade you should have noticed how dirty the water is. This mucky, dirty, and micro-algae-filled water has been covering the precious grass flats of the Central Florida lagoon system for years and is slowly chocking out the ecosystem.

I’ve heard lots of talk on this topic from anglers and biologists alike; but I’m here to say “The lagoons are not alright!” From the Indian River to the Mosquito Lagoon…it’s all been down hill.

Yes. The photo above is an actual photo taken a few weeks ago in inches of water where you can barely see the bottom in the middle of the day.

The water quality is so bad that you essentially can’t see your fly or bait after it drops down more than a few inches below the surface. It’s so bad that if you’re not familiar with the area you’re in you will not be able to tell if you’re on a grass flat or an open basin.

There are tons of theories about why this is happening. From mullet stirring up the water to loose runoff restrictions by the surrounding municipalities- everyone seems to have an idea about what’s causing it but no one has any solutions.

It’s an unfortunate situation but as a single patron you can’t help but just sit back and say “What the F!” 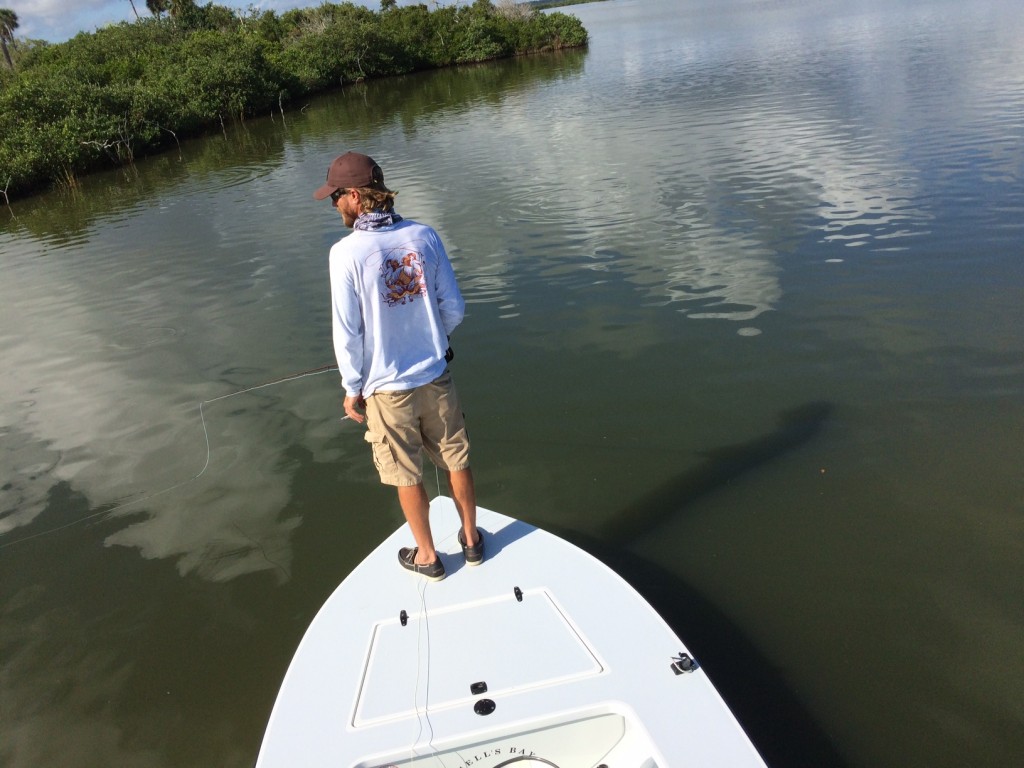 As for me I think it’s a bunch of compounding factors as to why the lagoon system is in such peril.

The ‘Great Florida Freeze’ of 2009 dropped temperatures so low that most of the Snook and Peacock Bass population north of Miami died off. This also caused a massive freeze-off of sea grass which is helpful for filtering out contaminants in the water.

Check out this article I wrote previously about grass levels using satellite photos in Mosquito Lagoon.

The lovely planet Earth which we live on goes through cycles that last anywhere from years to decades. Sometimes it’s something as simple as ‘El Nino/Nina’ that causes warm temperatures to linger on and prolong the life of warm-water bacteria and algae.

The surrounding cities, counties, and municipalities which border the Central Florida lagoon system do not have strict enough runoff laws that can help keep chemicals out of the ecosystem. Lawn fertilizer and septic runoff are just a few of the chemicals being leaked into the lagoon’s water system that can be curtailed in order to help in the lowering of PH levels.

Now I’ll be the first person to say we need less government, but the conservationist in me would have no problem voting for stricter runoff regulations.

These three factors make the most sense to me. Algae blooms in hot water and when the hot water doesn’t subside it [algae] grows stronger. Pair that with the historically high levels of seagrass loss we’re experiencing and you have a cocktail of prime ecosystem failure. The lagoon system can’t clean itself out at the levels that humans are allowing chemicals to enter and even natural checks and balances like a cold winter can’t put it to rest.

This year (2015) has experienced the longest algae bloom I’ve ever seen to date; from late April all the way up until the publication of this article in December. Hopefully one day soon ‘El Nino’ will subside and usher in some colder temperatures to help kill off some of the bacteria and algae in the water so we can finally hunt some fish on the flats in less-than-soupy conditions.